A Sad Day in Phnom Penh

Our night bus was supposed to come with fully reclining bed-chairs to make the best of what we were told was an uncomfortable and bumpy trip to Phnom Penh. Instead of the “luxury” bus we had been promised, we got switched at the last-minute to a rickety old bus with hard leather sets that reclined thismuch and were impossible to sleep in.  The air-con was blasting all night, leaving us shivery and cramped as we tried to sleep for a very long and incredibly turbulent 7 hours on our trip to the capital.  Needless to say, we were rethinking our plans to stop in PP only for the day and then catch the bus to Sihanoukville later on in the day.  But we decided to press on and do what we had planned for the day, booking our bus tickets for another five-hour bus journey later on in the day to the beach town of Sihanoukville.  Super Travellers, unite!

It was a sobering and sad day as we took the time to look at the sites commemorating the genocide of the Khmer Rouge regime in Cambodia in the 1970’s – only 40 years ago!  The country s still recovering majorly from the events of this period in its history, everywhere there is evidence of commemoration and rebuilding from the tragedy that occurred here.  If you want to learn more about the genocide that happened in Cambodia, I’d start here. http://www.ppu.org.uk/genocide/g_cambodia.html

We visited the Choueng Ek Killing Fields in the morning, a mass grave site that served as a burial ground for many of the prisoners in the Toul Sleng Prison that we visited later in the day.  Both sites made a huge impression on us, including my travel partners who weren’t as aware of what happened in Cambodia before they visited.  It was an eye-opening experience to visit the places where these atrocities happened so recently, and inspiring to see how far the country had come in so little time.  The dead were honoured here in memory and spirit, many people I saw were visibly accepted by the horror of these sites, and I think having these places open and available to the public is good: is educates us about how these things can happen and what we can do in the future to prevent genocide from happening again. 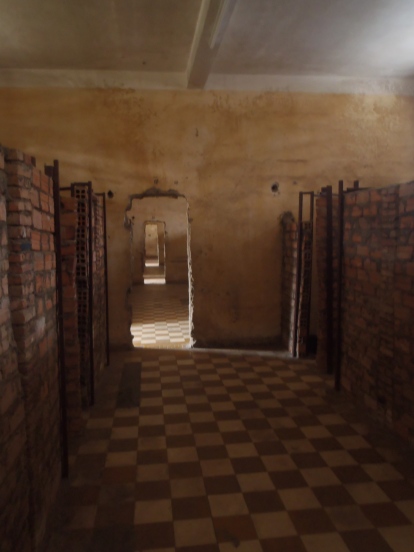 Our day was reaching critical mass by that point.  We literally had ten minutes to rest after lunch before boarding the bus to Sihanoukville and our beach retreat.  Our bus was magnificent!  Fuzzy seats and lots of space to spread (squish) out.  I was an expert at sleeping on buses by this point. I used my sarong as a blanket, cuddled up with my trusty travel pillow and settled in for a five-hour nap.