The Road to Penang

Posted on August 17, 2013 by Danika Zoe
Wahoo! Nothing like a nine-hour bus ride to occupy your day.  Although travel days are different in a way because there’s no way of knowing what your destination brings, it usually turns tedious pretty fast.  Our bus driver was late because of traffic (excusable) but had to be called back to the drop-off point because he had taken off without us, his four passengers, in the back!  Oh man.  Our driver, captain Taz, as he introduced himself, was dressed for a day of golfing in short pants, long socks and a golfing tee and hat.  Hmmm? I didn’t ask.  Soon after we left it was clear he was an AWFUL driver with a lead foot and shitty attitude behind the wheel, I wedged myself between a bunch of backpacks in the backseat and hoped they wouldn’t fall on me – which they did – eventually.  Then. The traffic.  OH MY GOD. It was some of the worst traffic I’ve ever seen, and we inched along the road, lurching forward with every stop. Only my music made it bearable, and I watched the charge slowly decline and prayed the tunes would hold out till we got there. They didn’t.  Our minivan held four other passengers besides Micheline and I, and after three hours we were all hungry and desperately had to pee!  We asked Captain Taz to stop, and he replied that he would but he would keep the van inching along in traffic and we would have to run and catch up.  What? So we ALL ran out when the door opened, I guess he realized he would have some explaining to do with an empty van and no passengers, so he stopped for us reluctantly.  I peed in some Muslim guys backyard (oops sorry!) and we stopped at a roadside stand to buy fruit (some passengers were not as prepared as us with our loaf of white bread and peanut butter) and ran back to the torture device that was our ride.
The time slowly passed as we alternated between breakneck speed and painfully slow jerkiness, finally we came to a roadside stop where we were the ONLY ladies with our hair uncovered, this was a sight for the rest of the Muslims around, who were lovely and friendly and fascinated by us, especially by Micheline’s blonde hair!  We got back on the road, and our driver told us he “didn’t know” how long it would take for us to get there….lol. We finally arrived around 8pm and were recommended to a guesthouse by our golfer/driver/captain. Since we were too tired to object and the guesthouse looked clean and there was a sweet mural on the wall, we paid the 35 Ringgits ($11.50 CAD) and dumped our stuff, happy to finally be in Penang.
We dumped our stuff and wandered around a bit, since we were in the heart of Chinatown there was a sweet night market serving all kinds of food and drink, so I sat down with a plate of noodles and we had watermelon shakes and happily went to bed after walking a bit and realizing there’s not much nightlife around! 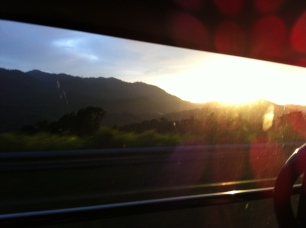 in-van snap of the sunset 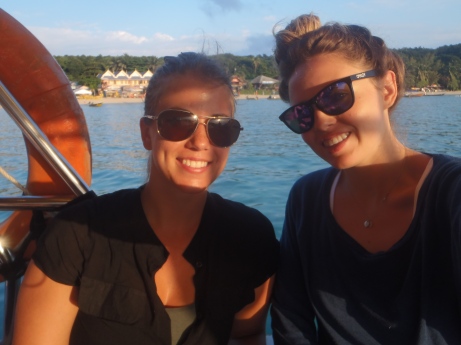 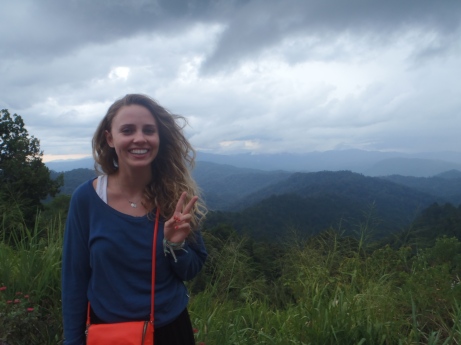