My Last Week as a Sydneysider

Posted on October 4, 2013 by Danika Zoe
My last week in Sydney was a perfect mix of downtime and sightseeing.  I’ve tried to save my money for Melbourne and New Zealand, so I took it easy for a few days and caught up on my emails, registered for school when I’m back in Canada and caught up with some friends and family as well. I did have some outings, though, and made the best of my time left in Sydney.  One day trip brought me back to Chinatown and Darling Harbor, where I thought I might go to the Aquarium but then cheaped out when I saw how much it was!  40 bucks?  No thank you – that’s my daily budget!
I started my day in Chinatown where I was on a mission to do some cheap souvenir shopping at Paddy’s Markets, a bargain type of mall where there were tons of stalls selling cheap souvenirs and useless crap.  I love useless crap!  But I refrained from buying too much stuff cause of course I have to carry it all on my back.  It’s a good deterrent from spending too much.  After checking out Chinatown ( I think I’ve been to about a hundred Chinatowns on this trip) I went down to Darling Harbor, which was gorgeous in the daytime as well.  I walked all along the harbor, checked out the tall ships around the Naval Museum and walked all along the Cockle Bay Wharf, with its trendy shops and restaurants catering to the hundreds of tourists milling around.  I had sticker shock at the aquarium after that, and decided to go instead to the Queen Victoria Building, which I had stumbled upon the other day and wanted to check out in more detail.  The QVB is actually a part of downtown Sydney called the Strand Arcade, a gorgeous stretch of Victorian buildings (now more populated with office buildings and suits) where you can wander and gawp at all the buildings.  But the obvious centrepiece is this gorgeous “mall” (I use that word lightly as it looks NOTHING like any mall you’ve seen, its super swank) with beautiful columns, staircases and very expensive shops and cafes all catering to Sydney’s business élite and upscale shoppers.  I had a way overpriced coffee and some delicious macaroons while people watching and had a great afternoon just browsing and window shopping.  Yay!
I also took a day trip to Manly Beach, you have to catch the ferry there from Circular Quay, and the harbor views are unmissable.  I took tons of pics of the opera house and the Harbor as we passed.  I got to Manly kind of late and only got an hour or two of rays, but it was fun to walk around and see both sides of the beach, I wish I had time to do some of the coastal walks around the area, but it was getting dark/cold and I needed to get back on the ferry to watch the epic sunset over the harbor on the boat!  It was my last beach day for a while, as Melbourne is not going to be very warm and I’m not expecting New Zealand to be either, so it made me super sad as my fabulous tan is fading.  I worked so hard on it all summer!! WHYYYYYYY.  I know, I’m so hard done by. Ha ha ha. 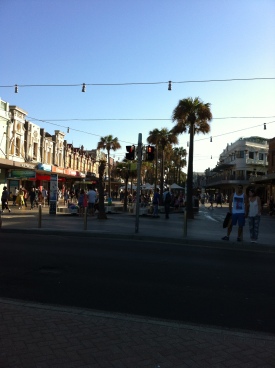 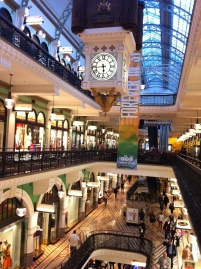 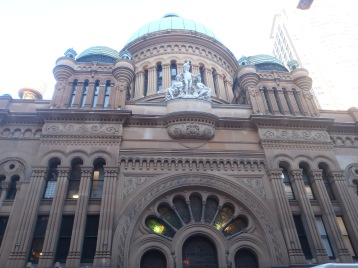 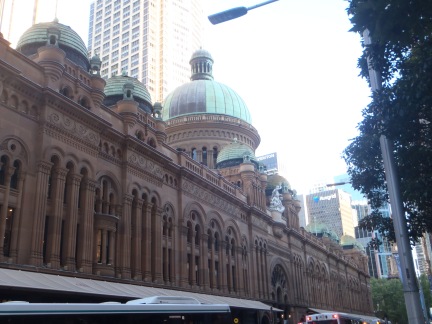 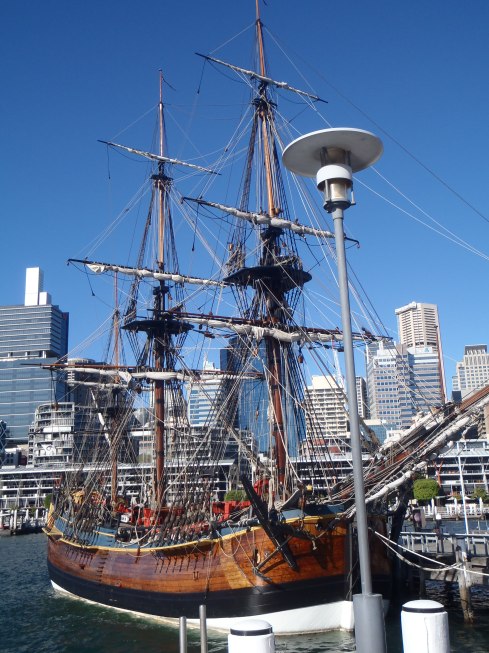 View of CBD from Darling Harbor 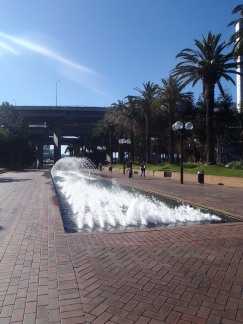 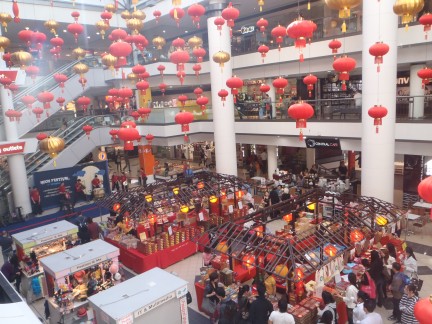 Paddys Markets
One more fun thing I did this week was drop in on a house party with David and his friends, I met a ton of great people and partied the night away.  I’m loving the laid back Aussie lifestyle, it’s so easy to get into the swing of things here, I think if I wasnt starting to miss home I might consider setting myself up in Sydney for a while!

Posted on September 30, 2013 by Danika Zoe
My second week in Sydney was a lot more fun and active, on account of the fact that my cough was FINALLY clearing up and I could go out and enjoy some of this fabulous city!  There were definitely some highlights, the first was Bondi Beach.  It took me about an hour to get to the Beach on transit, I had been there last week but only during the evening for dinner, and I hadn’t had the full-on BONDI experience that I wanted!  Once I got to the beach, I snooped around a bit, checking out the shops and getting some lunch.  The beach is beautiful, not like the other beaches in Australia because it is surrounded by city buildings and shops, not at all secluded and tranquil like some of the spots I’ve seen but still really beautiful.  The beach was not to crowded as it was a weekday, but it was super windy so I couldn’t lie on the beach too long. Wah!  After my beach day i was finding sand in my hair, my ears, and my clothes for a while – dammit!
Another highlight of my touristy week was checking out the famous Sydney Harbor and the Opera House.  I took the train into town and got off at Circular Quay station, the heart of all the tourist action in downtown Sydney.  It is unreal. I am not exaggerating when I say it is one of the most iconic and beautiful harbors I have seen in my life.  I touristed around the Opera House, goggling at it from up close and from every angle – its has such an unusual shape, its hard to figure out how it stands up!  I also took a walk around The Rocks, which is a tourist district on the harbor where all the convicts settled by the port, kind of rough and tumble area in its day.  It’s completely sanitized now, while still retaining its charm as a historical district.  I stopped in at one of the delicious bakeries in the area and had a yummy lunch consisting entirely of baked goods (oops) and I regret NOTHING! NOTHING!
Some of the other highlights of the week included the customs building which had a miniature replica of the city under glass in the front foyer so you could actually see all of the city from above, and going for dinner at Wagyu in Chinatown where you could order all your food from screens on your table that was instantly brought out to you as soon as it was ready – no waiter required!  I also sampled some Nitrogen Gelato (heaps better than boring normal gelato) and hung out one evening in Darling Harbor, a beautiful harbor on the other side of Sydney with a gorgeous view of the city and great nightlife!  My next stop was the Blue Mountains – it’s time to climb some steps, baby! 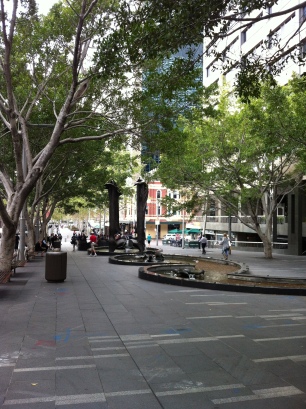 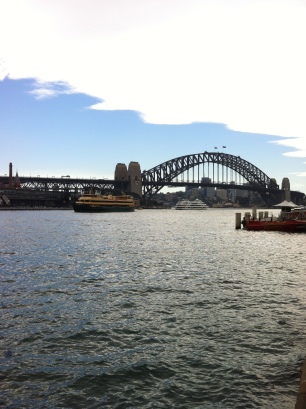 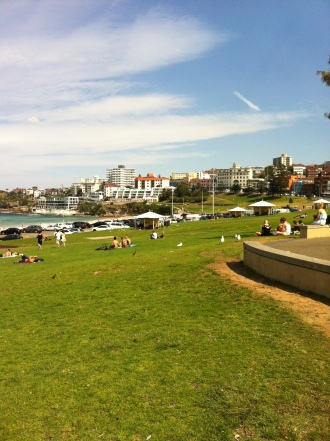 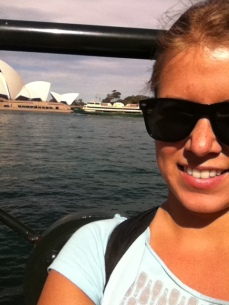 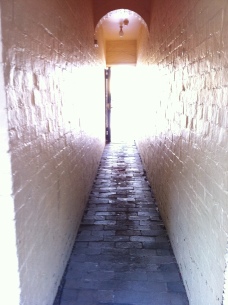 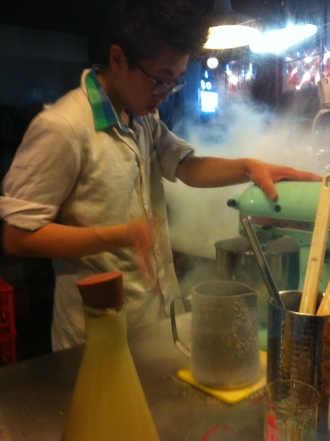 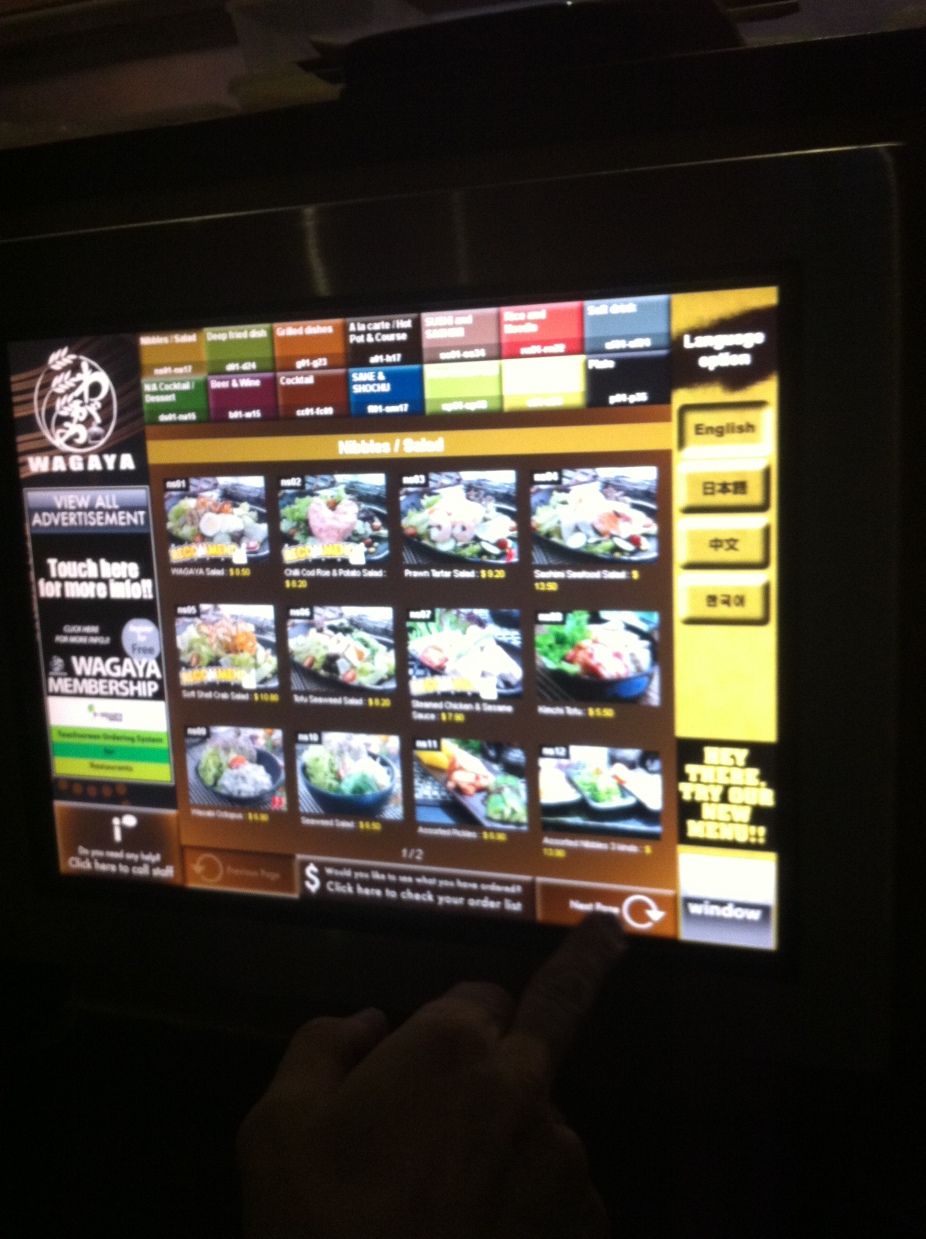